How much solar power should my new system produce? 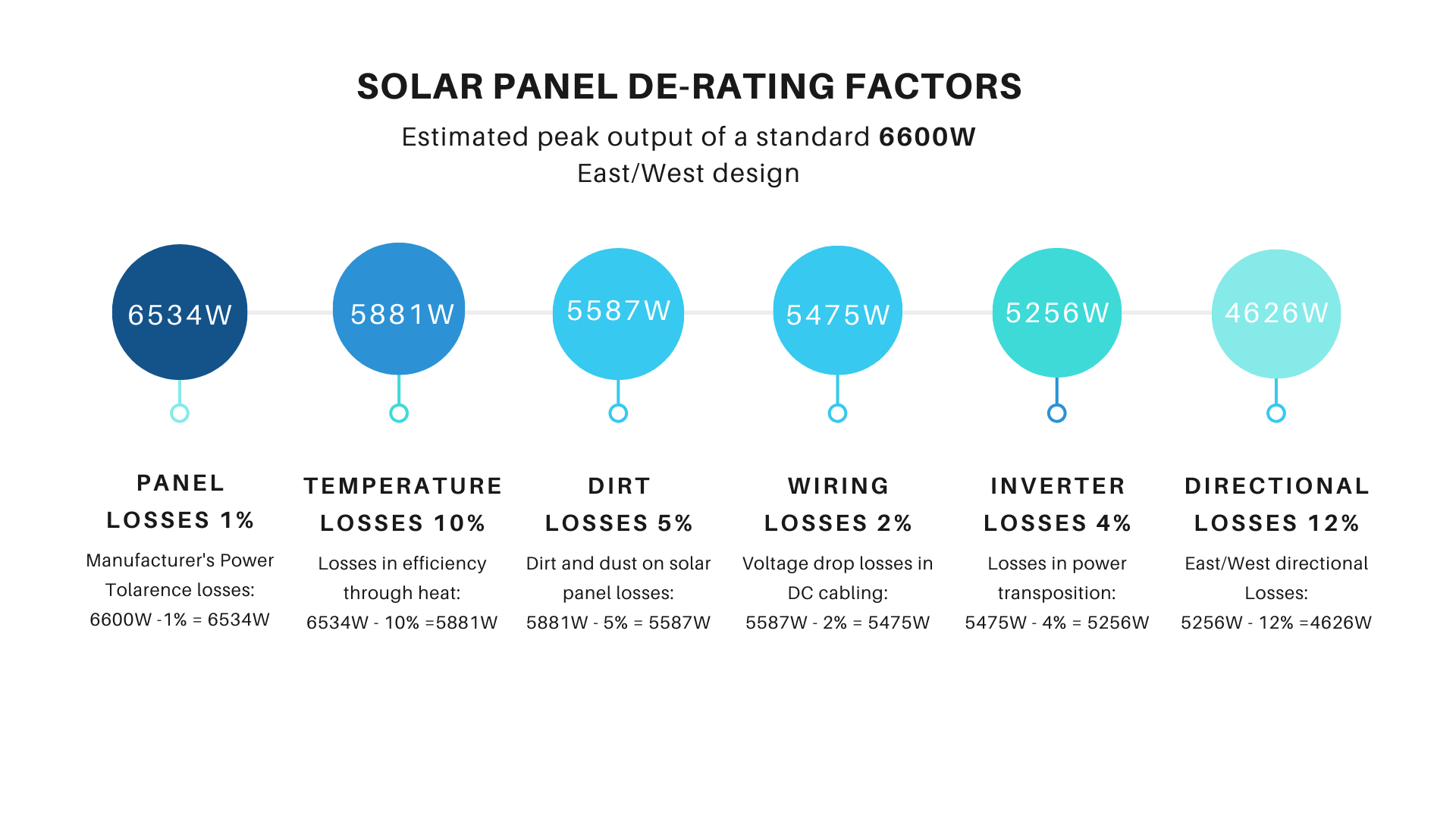 This week’s blog post is inspired by a recent callout I received, and a part of solar world that’s sometimes not known or understood.

I received a called from Jason. He’d had recently had a new 6.6kW solar system installed at his property and was worried that his system wasn’t performing as expected. Luckily, we were able to pick up on the reason why before attending the callout 😉

I ran through the numbers with Jason over the phone. His solar system is East/West facing without any shading issues and comprises of 6.6kW worth of panels, yet his system is only peaking at a little under 4500W… So, what was the problem? Why wasn’t Jason’s new solar system reaching its rated power output of 6600 watts?

The rating of each solar panel indicates the amount of power it could possibly produce under perfect conditions. But in reality, it’s impossible to hit these numbers.

In the real world there’s a variety of factors that impact a systems overall energy yield. The six main reasons are:

So, looking at Jason’s solar we can actually calculate using the above percentage losses the amount of power the system is expected to generate at peak times.

Starting with 6600W of generated electricity, we’ll see pretty close to the numbers in the chart at the top of this article.

You’ll also notice once you start to dig a little deeper, that the majority of 6.6kW solar systems are packaged up with a 5kW inverter. Our good friends at Energex allow us to over-size our inverters by up to one third. Which is great, as we can reach higher production earlier and later in the day. Plus, as you’ll see in the above de-rating diagram, it’s rare our systems will ever peak much over the inverter’s rating in any case, so it makes sense.

After running through the numbers with Jason, he was satisfied that his solar system was working as it should, and he’s enjoying the huge reduction in his bills each quarter.

When designing and quoting solar panel brisbane installations through South East Queensland, it’s important to make sure all elements are factored in when calculating expected yields and payback periods for our customers.

Not only should the system de-rating factors be calculated, but other (very important) aspects of design should be considered as well, including:

The whole thing can be confusing, especially when you first start looking into solar. Don’t worry though, we’ve got your back!

Trav and I have spent a lot of time making sure we get the very best solution for each of our clients. We take into consideration all the above factors and more. And the best bit? We’re only a click away!

If you have any questions or you’re ready to see what you can save with a new system at your place, with actual, carefully considered data – click this link and we’ll get you started.

Ready To Take The Next Step? SLASH YOUR BILLS!! Click here to get your FREE guide!